Home/Uncategorised/Capping the Spring
Previous Next 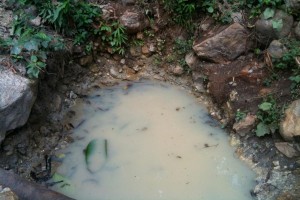 In March 2015 we hired a local builder to cap the spring.

During the dry season pressure on the spring near to Gbiné can get intense. In 2013 the spring almost dried up, and in conjunction with the pump in the village being broken, clean water was a problem.

We put an appeal out on GlobalGiving and managed to raise money to cap the spring to keep the water clean and flowing.

We contacted Samuel Owoundi, a local entrepreneur, who sent us his sub-contractor, Moise Akombombo who had experience in spring capture. Having given us an estimate of 300,000 cfa and explained his proposed method it was decided to proceed at once, while we were on site to help and supervise. 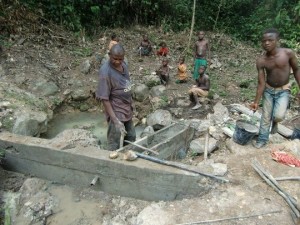 A meeting with the village elders assured us of their support so we started work the next day.

A new path was cleared and widened to allow easier transport of sand and cement, then the waiting began. First it was delivery of materials that were delayed, then Moise’s father suffered an accident which meant that he needed regular visiting, so work only advanced sporadically. However with the help of the Baka workers and Andi’s hard work it was completed on time. 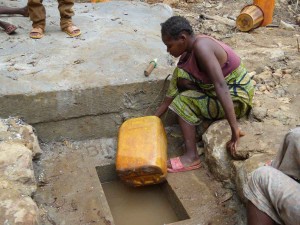 The water level was successfully raised by about 30cm and by digging an outflow trench a fall of 50cm was attained,and the holding pond filled with boulders and capped with concrete to protect from surface pollution. A small concrete basin was built under the flow pipe to collect the overflow. We were able to have a simple inauguration ceremony the day before we left. 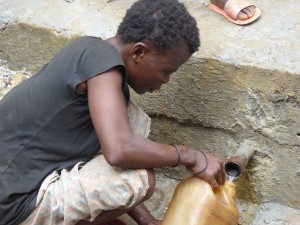 The quality of the water will be greatly improved but not the quantity, although by stoppering or eventually a tap, a reserve of several 100 litres can de accumulated overnight. it is still far from enough for the local demand as the village pump is still not functioning.

About the Author: Martin Cradick