Here’s one of them:

This is what a magazine in Cameroon wrote about the project:

Baka musicians from the far South-East corner of Cameroon, Baka Gbiné, have been recording songs for an innovative education project. They have been commissioned to write and record 12 songs that will help teach Baka children basic French, numbers and letters. 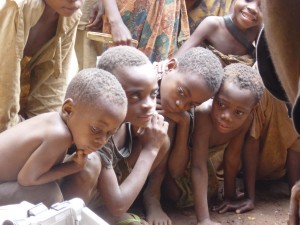 Martin Cradick of GME to help

The recording is being carried out by Martin Cradick of Global Music Exchange. He has been working with this group of musicians and their families since 1992. “It’s great to see the seeds of our work with Baka at Gbiné bear fruit”, he said. “Proper paid work for these musicians from a very deprived part of Cameroon. So often they are exploited for as little money as possible. That’s not much around here. It can be as low as 300f for several hours hard work. It is good to see their exceptional talents recognised. ”

With the blessing of Her Excellency Mme Youssouf Hadidja, Minister of Basic Education, Martin Cradick has been asked to oversee the recording project. They had a meeting at the ministry while Martin was in Yaounde where she expressed her interest in finding a solution to the problem of Baka education. Martin will be setting up a mobile multitrack studio in the forest several kilometres from the village and road. Here the musicians can work undisturbed by the noise if everyday village life. The finished songs, sung in both Baka and French, will be turned into mp3s and put onto wind-up MP3 players that will be give to several pilot Baka communities. The songs include counting, letters and phonetics. The songs will be ready in march in time for the pilot projects to 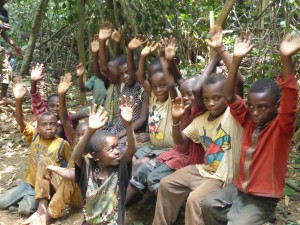 start. It is hard to see how this project could ever have come to pass without both Baka Gbiné, who are probably the only group of Baka musicians around capable of writing these songs, and Martin Cradick, who is probably the only person capable of recording and producing them in such basic conditions. If I’m wrong please tell me. We need more of their kind in Cameroon.

About the Author: milo